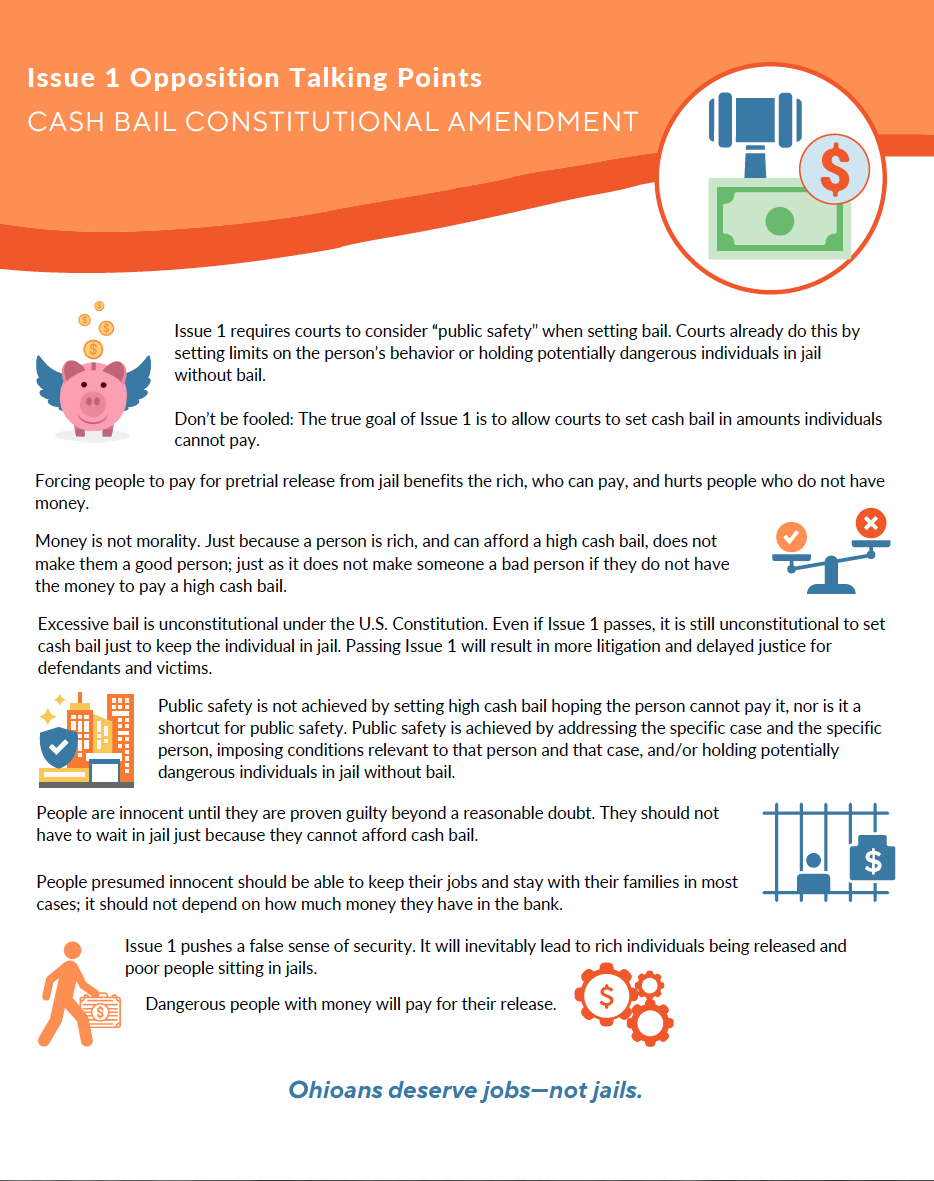 Now that early voting in Ohio has started, I wanted to reach out regarding Issue 1 on the ballot. The Office of the Ohio Public Defender strongly opposes Issue 1 because of its negative and disproportional impact on our clients.

What does Issue 1 do?

Issue 1 amends the Ohio Constitution to do two things. First, Issue 1 requires courts “to consider public safety, including the seriousness of the offense, as well as a person’s criminal record, the likelihood a person will return to court, and any other factor the Ohio General Assembly may prescribe” when setting bail. Second, the constitutional amendment removes the Ohio Supreme Court’s authority to set rules and procedures regarding bail and gives that power to the Ohio Legislature.

Why is OPD opposed?

Under the guise of “public safety,” Issue 1 will allow courts to set ridiculously high cash bail amounts to keep legally innocent people locked up pretrial. Our clients’ due process rights will be infringed as prosecutors will not have to meet the requirements of a pretrial detention hearing to keep our clients locked up. Instead of taking the time to set pretrial release conditions that are specific to each person and each case or doing a pretrial detention hearing, courts will just set high cash bail amounts, and hope defendants cannot pay it.

As you well know and have probably observed over your career, legally innocent people who are incarcerated pretrial are at risk of losing their employment, homes, and families. Individuals who are incarcerated pretrial are more likely to plea to offenses they did not commit, have worse outcomes in their case, and receive longer prison sentences. Our clients should not have to wait in jail just because they cannot afford bail.

Unfortunately, courts and prosecutors have historically ignored state and federal case law that makes clear that cash bail is only meant to assure the person returns to court. However, Issue 1 will enshrine this unfair practice into Ohio’s Constitution.

Why is Issue 1 bad for public safety?

Courts and prosecutors will have little to no information about a defendant’s finances when setting these arbitrarily high cash bail amounts. Individuals like our clients, who do not have much money, will be stuck in jail, whereas wealthy individuals, even potentially dangerous ones, will pay to be released.

Why is Issue 1 on the ballot now?

What can I do?

As always, thank you for your service and leadership. Please do not hesitate to reach out if you need additional resources.